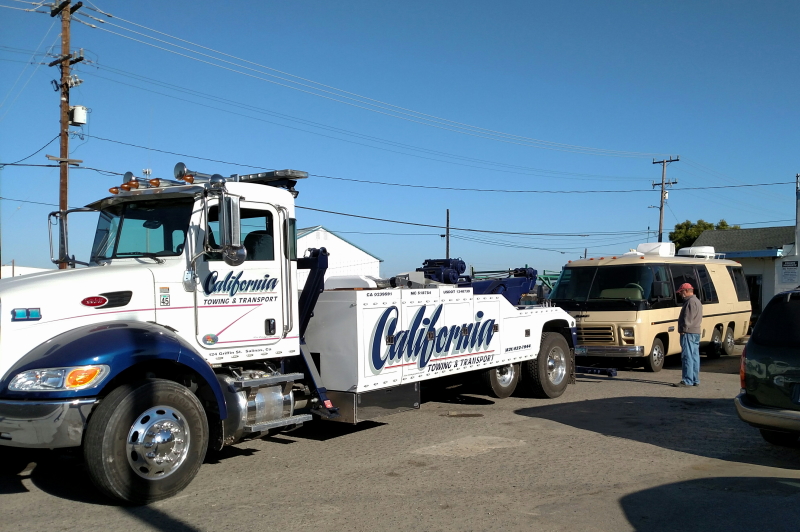 We didn’t make it to the Coos Bay rally this time – instead, we experienced the difference between the Classic GMC Motorhome community and all others and, overall, had a pretty good time to boot. On Thursday, September 29th, the third day of what was to be a three-week trip to the Fall 2016 GMC Western States rally at Coos Bay our engine basically disintegrated just outside of King City, California.

It was our plan was to visit friends and family in the San Jose area and then more friends and family in the Sacramento area before joining a caravan to the rally. Just 5 miles short of King City, where we planned to spend the night at San Lorenzo County Park, we heard some loud “crackling” sounds coming from the engine. In just a few seconds I pulled over to the side of the highway and shut the engine off while noting that none of the instruments indicated any trouble. Looking around though, I saw large clouds of steam billowing out of the exhaust pipe in the back indicating at least a blown head gasket and possibly worse.

I called Good Sam Roadside Assistance and told them that I had some engine damage and needed a tow to “the nearest, willing and qualified service center”. They did their usual, trying to find a place to tow us for some major work. Back in 2007, at the end of our first year with the GMC, we broke down with a loud engine knock in Jackson Hole, Wyoming and Good Sam did find a qualified service center about 90 miles away and did not hesitate to tow us there for an engine replacement.

This time they seemed to be less interested in “qualified” and were more focused on “nearest”. They said they had found a place that was only 5 miles away in King City and their only requirement of the service center was that it was “willing and qualified” (apparently, in their own opinion only). The King City shop turned out to be a tire store with some auto repair capabilities and the mechanic on duty changed his mind about “willing and qualified” when he saw the coach. We had the tow truck take us to the county park for the night where we called Good Sam and asked to be towed somewhere else on Friday morning.

On Friday morning Good Sam said they had found a shop in Salinas – 50 miles farther North – that said they could fix our engine. We had lived and worked in the Salinas area for many years before moving to Arizona so I was curious about the shop. I got the name and number of the shop owner and discussed what was required and persuaded him that he did not have the knowledge or the equipment to work on the coach. Good Sam, however, insisted that, since he initially said he could do it, he was “willing and qualified” and would tow us no farther. We arrived at the shop by mid-day on Friday and my suspicions were confirmed. It was basically a local one-man auto repair shop with a lot full of cars waiting to be repaired – a nice guy but not someone I was going to trust with my GMC. Having lived there, we called friends who might have ideas for a different shop but there were none we felt comfortable with.

Frustrated at the lack of choices in such a sizeable town, I called Manny Trovao in San Jose to see if he had any ideas. For those not familiar with the GMC: Manny is a legend in the GMC community for his transmission work and also for front-end and braking systems, not to mention diesel conversions. I had already asked Applied GMC what they could do but Jim Kanomata was on his way to the GMCMI rally in Ohio and Nick, his second-in-command, told me they were all backed up and could not even look at it for a month. Manny, with no hesitation, told me to “bring it to my house”. He said he would help as much as he could but was leaving for an 11-day cruise in just over a week and was very busy. I would have to do most of the work myself. Not seeing much choice I agreed – still hoping it was only a head gasket.

By this time it was late on Friday evening so we decided to spend the night in the repair shop’s parking lot and call the tow company to take us to Manny’s on Saturday morning at our own expense - $825 (we are appealing this with Good Sam - update 11/15/2016 our appeal was approved for the full amount - we are Good Sam fans). We arrived at Manny’s on Saturday around noon. Manny tried to start our engine and declared it to be “trash”. It would have to be replaced. We left to visit our son and his family who we had not seen for about a year and a half. I told Manny I’d be back on Monday morning to get started.

On Monday I discussed engine replacement alternatives with Manny and my first choice would have been a rebuilt engine from S&J in Spokane, Washington but they had no rebuildable 455 cores. They did have a 403 but did not have the proper intake manifold and pan for the motorhome. Another choice was a rebuilt 403 from Peter Huber’s coach which had been demolished in a tow truck accident – I did not like the price and, most importantly, did not trust the rebuilder. Finally, Manny suggested the possibility of using the engine from a 1975 23-foot coach that had been sitting next to his driveway for at least the past 10 years. Manny drove it there and parked it 10 years earlier and it had not been touched since. The engine had only 52,000 miles on it and had been maintained by the local county government during that time. I agreed that was what I wanted to do.

On Tuesday, October 4th, 7 days before Manny was to leave for his cruise, we got started removing the engine from the old coach. Getting that engine out took until Wednesday morning. Now the task for me was to get my engine out while Manny prepared the “new” engine for use with a new timing chain, new pan, head, and intake manifold gaskets, and some meticulous cleaning.

At about 11:00am on Wednesday I got a phone message from George Beckman that said he also had problems getting to Coos Bay because of a problem with his transmission. He was about 4 hours away from Manny’s and, if I needed help, he would be there by the end of the day. How lucky could I get? First Manny provides a work place, knowledge, tools and even an engine and now a fellow GMCer has offered to help remove and replace the engine. I think I would still be there if it were not for George.

George and Ruth arrived late on Wednesday afternoon and George and I, along with Manny, worked from 8:00am until about 5:00pm or 6:00pm every day for the next 6 days. Manny left on schedule on Tuesday morning. George and I got the “new” engine started on Tuesday afternoon. On Wednesday, October 12th we gave George and Ruth a ride home to Colfax, California, about an hour North of our second son’s home in the El Dorado Hills area near Sacramento. The engine ran very well – much better than the old engine had been running before disintegrating.

We didn’t make it to the Coos Bay rally but we did have our own little “Minnie” rally, learned a lot and solidified our friendships with Manny, his wife Deo, and George and Ruth Beckman.