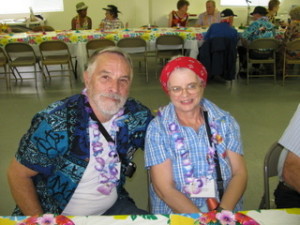 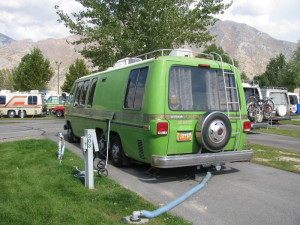 Nancy and I have only had our Gherkin, (our 26 foot Parrot Green 1973 GMC Sequoia) for five years now, so we are relatively new on the GMC scene and can’t be considered experts on anything by any stretch of the imagination. However, we are not new to camping and the recreational vehicle scene. When we were young we tent camped, then we got a Coleman pop up tent trailer which got us up off the ground. After that, we had a truck mounted camper and as the family grew we moved up to a travel trailer. Later, we graduated up to a thirty two foot Pace Arrow Diesel motorhome and finally we traded up from that motorhome to our Gherkin. Please trust us when we say that was a "trade up" even though it was a trade down in size and back in years.

We were most fortunate in acquiring Gherkin from her original owners and they generously gave us a huge stack of all the shop manuals, and the GMC literature they had acquired over the years. This included all of the GMC Western States newsletters back to May of 1988.

Which brings me finally to the reason for this little tale. I have been reading these old newsletters with their Tech Corner information and I am amazed at the wealth of knowledge contained in those old newsletters. Along with the GMC Western States Newsletters were all of the GMC News quarterly newsletters from Cinnabar Engineering up until the time we bought Gherkin. We continued the subscription to GMC News up until they discontinued publishing, so that now we have every issue from #1 September 1994 to #65 December 2010.

Between the GMC Western States Newsletters and the GMC News just about everything mechanical and cosmetic about a GMC Motorhome is covered in detail beyond what is covered in the shop and owners manuals. We highly recommend these as required reading for new GMC owners. These keepsakes and as complete as possible vehicle histories should be passed on from owner to new owner when GMCs are sold.

In the five short years we have had Gherkin, she has taken us on a marvelous 10,500 mile trip to Alaska, a super 9,000 mile trip to the east coast, two swell trips to GMC Western States Rallies and many short trips around New Mexico. All of these trips have been free of break downs, flat tires, blowouts, or broken windshields. We have experienced none of the Alaska trip horror stories, all just smooth enjoyable travels.

In all, we have put about 35,000 miles on Gherkin to where she now has around 155,500 miles under her belt. We have remodeled the interior a little and added a new refrigerator, a new air conditioner, different pilot and co-pilot seats and couch. We have added a few new mechanical items to help get better fuel mileage and the one ton truck front end.

This winter, as she aproaches her fortieth birthday, we are having a Cadillac Eldorado 500 cubic inch engine built up and installed, not because we need an engine yet but because we want to keep Gherkin running for many, many, many more miles and well into the future. We still have places to see and miles to go.

You might ask why should one even think about going to the trouble and expense of this engine swap? This engine swap isn’t for every GMC owner. We are not unhappy with the 455 Olds engine and the 3.07-1 final drive and they are not in need of rebuilding yet. We climbed 11,500 foot Hoosier Pass in Colorado passing some other brand behemoth RVs. Our first criteria was that we want an engine that is going to last us well into the future. We wanted the 10% more cubic inch displacement and the 400 horsepower with 550 foot pounds of torque for cruising and mountain climbing ability out here in the Rocky Mountains. The RV cam supplied by the Cad Company here in Albuquerque is supposed to give us that performance. The 3.21-1 final drive will put us right in the middle of the torque curve at the middle of our normal cruising speeds.

I have built a few engines and done a few engine swaps in the past but I no longer have the tools, equipment or physical strength to tackle this swap. So, we are paying the Cad Company to build the engine, transmission and final drive and swap it in to the GMC for us. . The ideal donor car is a 1972 Cadillac Eldorado. It took me about six months to locate a donor car. That car has the unique parts to make this swap work. The engine we got had about 100,000 miles on it and there was not a single ridge on any of the cylinders. The high nickel alloy of the Cadillac castings makes them very hard to wear out.

Turner’s Auto Wrecking at 4248 S. Willow Ave in Fresno, California claimed to have three more 1972 Eldorados when we got this one. Those of you out in the Fresno area might want to collect up those engines and parts and preserve them for yourself or other GMC owners.

The Cad Company has a custom made front engine mount to fit directly to the mounting holes in the GMC frame. Chris at the Cad Company said he had one last set of custom made headers for this application, so I said "sold"! Headers help the Cadillac engine breathe better and make better use of the RV cam, because the Cadillac exhaust manifolds are very restrictive. The Cad Company also has access to the engine hoisting equipment to get the old engine out and the new engine in.

For more information on this engine swap, there is an informative handout by Larry Weidner on the GMCWS web site (gmcws.org/Tech/Caddy_Swap.pdf) that was handed out at a seminar at the fall 2004 GMCWS Rally. It is my opinion only, but I think GMC should have used the Cadillac engine in the production of the motorhomes in the first place.